— What are the characteristics of the Universal Designs (UD) in your country of origin? (Characteristics that the country can be proud of or that have been made widespread)


Silvio Sagramola: First, in our country in Luxembourg, instead of the term UD, we say Design For All, and it has become something that is rather approached from its political and social aspects, and which is not yet anchored at the industrial levels. This can be a bit of a problem when politicians would talk about Design For All, and although the people understand the idea linked to that concept, the level of practical knowledge on this term is quite low, and there is the problem that this concept is not being systematically implemented.

—What kinds of problems are you facing in order to help spread Design For All? 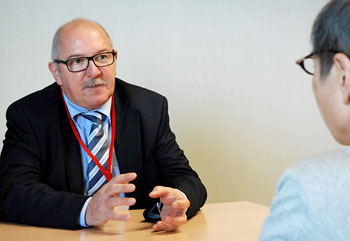 —What are your impressions on UD in Japan from having heard the presentations and seen the corporate displays at this conference?


Silvio Sagramola: I feel that I myself have not seen enough about UD in Japan, but what I understood from this conference is that the level that is being realized in Japan is very high. It is so compared to Luxembourg, and also to other countries that I visited since I coordinate the EuCAN network (European Concept for Accessibility Network). What I have seen in Japan is at a higher level than what I have seen in various countries in Europe. I mentioned earlier that UD is often approached from a more social and political side, but in Japan, I think it is actually being implemented in a more systematic way. Design For All and UD are visible through a huge diversity of technical solutions, and I think that is what is unique about Japan.

—Having seen the city of Tokyo, what do you think is the level of dissemination of UD?


Silvio Sagramola: I have a very good impression. The only problem I noticed was with the signage. Some of the information is only provided in the Japanese language, so I found it a little difficult to understand for people from outside of Japan. On the other hand, with regards to trains and subways, it is very easy to use them once you understand how the system with colours and numbers works, and they also have English information, which I thought was good. I thought it would be good if the language issue can be improved within the city as well. As for the posters and initiatives that received awards at this conference, unfortunately, some of them were only in Japanese. In such cases, we can only understand the illustrations, so I felt that it was unfortunate that even if we are very interested in its content, we are unable to acquire more information about it because of the language issue.


—The Olympic and Paralympic Games will be held in Tokyo in 2020. Please give us your opinions and advice on what IAUD should do in preparation for the games.


Silvio Sagramola: What I felt from having come to Japan is that everyone truly has a passionate sense of expectation. I think it is wonderful that the people want to make the Olympics and Paralympics more connected. I also read the vision of the Olympics committee on their website, and it talked about passing on the heritage of the games to the future generations, and I was impressed by that. I think it is very important to think about the future, and I think this type of thinking is wonderful. As for advice, I mentioned this earlier, but I think that would be in the information aspect. For example, it would be nice if you could have a facility that would provide road directions. I think you have achieved a very high level already for other aspects.