— Please tell us about the current situation surrounding UD and your impressions on UD in Japan.


Ricardo Gomes: First of all, Universal Design, (UD), started in 1991 and has come to where it is today, and over the years, many people voiced a variety of opinions, and a variety of advancements were made coupled with growth. With regards to UD, I think the trend is to try to make it better adapted towards elderly people as well.

When the term UD first started being used, it was authored, established and implemented in Western industrialized countries. It later began to be adopted and used in developing countries. At today’s conference, Sean Donahue talked about UD development in Uganda. In 2000, there was a conference on UD in Providence, Rhode Island This started to give developing countries many opportunities to voice their opinions on UD. 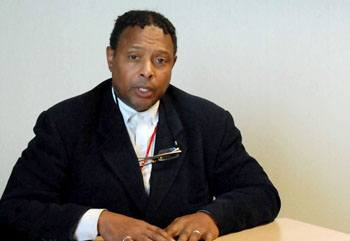 The perspectives and situations between Western countries and developing countries are different, consequently, there is a difference in the meaning and way that UD is interpreted for the conditions in those countries. A number of factors such as the values and the ideals of highly industrialized Western countries include things that cannot be put into practice in developing countries because of a lack of infrastructure and other such reasons conditions unique to industrialized economies. Therefore, I believe we are at a time when the concept of UD needs to be re-evaluated, or the meaning of UD and its usage needs to be re-thought of in more inclusive and diverse manner.

I would like to give an example for what I just mentioned. I talked about this yesterday and the day before when I stated in my presentation that there is an aspect of differentiation in the Olympics and the Paralympics. I think we need to make an effort to conduct joint branding of these two dynamic world sporting events.

As UD develops in this manner, I think that at a certain stage, UD needs to become inclusive of all, and become something where everyone can share the same values. However, in this situation, I think there will be some aspects where the needs will vary depending on such differences as gender, economic scope, ethnicity, and culture.

In Japan, there is a wonderful display regarding UD. You can tell by looking at the success of the IAUD and how it has progressed greatly over the years. It incorporates the use of technology and is very modern, and it is centered on the perspectives of the consumers. It is unique, and reflects the culture, economy, and society of Japan.

However, applying and utilizing the same things that are displayed here in Japan may not necessarily be appropriate for Uganda. The reason why is because there are differences in their economy and their income level. If the resources are distributed in Uganda using the methods that were introduced at today’s presentation, in the end, only a very few percentage of the population would be able to receive merit from the UD.

Meanwhile, there are also differences in the economic scope, the economy itself, and the population ratio. In Japan, there are more people who are age 65 or over than those who are 25 or younger. But in Uganda, I think it is the opposite situation. As you can see, there are many circumstances that are different. In the end, we will also have to change how the resources will be divided. In Uganda and other such places, I think UD will give thought to medical treatment and health care delivery, particularly amongst the children and the youth. However, in Japan, UD must think particularly about how to provide support to elderly people and about the health of the elderly. As you can see, there are differences when we compare Uganda and Japan. And so, the application is characterized by differences depending on the situation.

As a final analysis, I think UD is something that requires a filter. For example, it would be such filters as ethnicity, culture, and economy, and this must also be used when making adaptations for Japan. I mentioned about the seven general rules, but I think it will become important to use such filters in utilizing these seven rules. Japan and Uganda are different, and I think there will also be differences between highly advanced industrialized societies and low-income agricultural agrarian societies.

I think UD is like a palette. This palette is provided at different levels. In other words, by using the filters, we need to make UD into something that is effective and which everyone can take responsibility in implementing them.

In summary, in the beginning I mentioned that I use the terms UD and Inclusive Design to mean the same thing, but I think that Inclusive Design also incorporates the concept of economic scope. When compared to the time when UD was conceived, I think Inclusive Design includes a framework that reaches beyond what was originally conceived for Universal Design. For example, I think different things change in response to various situations such as gender, cultural issues, and society. Universal Design and Inclusive Design principles should not be something that is mandated upon people, but should be established and evolve in a cooperative manner with a focus on the users, their inherent collective needs and pluralistic well-being in society.