— What are the characteristics of the Universal Designs (UD) in your country? (Characteristics that the country can be proud of or that have been made widespread)


Imma Bonet: I’d like to talk especially about Universal Designs in the Catalonia region of Spain.

In Europe, instead of Universal Design (UD), we use the term Design For All, so I’d like to base what I say on this. First of all, Catalonia is different from Japan in that it is based on law. In Japan, I believe that UD is being practiced not necessarily in order to be in compliance with the laws. However, in our case, whether it is companies or businesses, Design for All have been implemented because there are laws, so I think that is a significant difference from Japan. But on the other hand the people of Catalonia place importance on responding to diversity. To be open to all aspects of human diversity is part of their way of thinking.
I participated in the second international conference in 2006, and I have the impression that things have advanced and evolved greatly since then.

—What is your impression of UD in Japan in comparison to your own country? 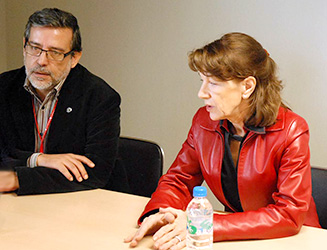 Imma Bonet: In Catalonia, as I mentioned before, the difference is that Design for All is being implemented because we are required to do so by law. However, in Japan, my impression is that you are implementing such designs because you feel the necessity for it from an emotional and psychological standpoint, or because the companies have a sense of responsibility to implement such designs.

Also, Japanese companies mention the efforts they are making toward UD in their corporate information, but in Catalonia, we have no such practice.

—The Olympic and Paralympic Games will be held in Tokyo in 2020. This is also a theme for this conference, but from the perspective of someone from outside of Japan, please give us your opinions and advice on building global UD toward 2020, including your expectations on city planning and IAUD.


Imma Bonet: My advice is that in preparation for the games, I think you need to get as many people involved as possible. I think it is important to have many people participate in the process, and make efforts to make each and every people of Japan feel that they are an important part of both events.

— Thank you very much.