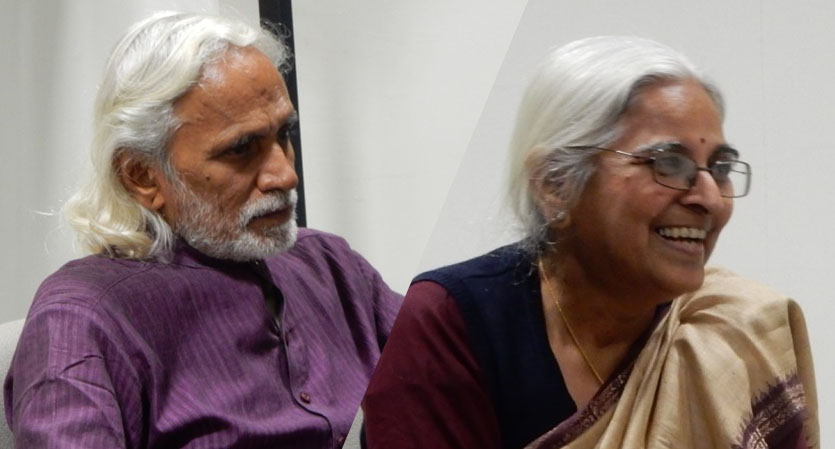 —I am told that Dr. Padmini Tolat Balaram studied in Japan two times, so you lived in Japan for two years in total. What was your impression about Japan at that time?


Padmini Tolat Balaram: I visited Japan for the first time in1992 to attend a Craft Workshop at Toyama and after the workshop, travelled in Japan to see Japanese Indigo for a month. In 1995-96, I was awarded Japan Foundation Fellowship for research on ‘Japanese Indigo and Its Use: A Comparative Study with India’. At that time I was affiliated with Japan Folk Craft Museum (Nihon Mingeikan) and stayed in Tokyo, Okinawa, Tokushima and Nara, during the year.
In 2000, I was invited as a speaker to talk on Indian Ikat and also to bring Indian ikat weavers and the patola weaving handloom to organize patola (Indian Ikat from Gujarat) weaving demonstration during the Asia Kasuri (Ikat) Road Festival, at Haibaru Bunka Centre, Okinawa.

I again visited Japan in 2006. I lived in Ibaraki City, Osaka to do research on ‘Textile Routes from India to Japan and Its Impact on Japanese Textiles’ with the Japan Foundation support for international exchanges At that time I was affiliated with National Museum of Ethnology (Minpaku) as a visiting scholar, and I attended the international conference of the International Association of Universal Design (IAUD) in Kyoto for the first time. I have a very good impression about Japan. Japan is like a second home to me. I don’t have the same feeling in any other countries. Japanese people are very kind and helpful. It is convenient to go anywhere. I don’t get lost at all. The railway and bus stations have very good signage system and trains and buses run punctually. If I ask people for directions, they not only show me, but some time come all the way accompanying me if they feel I would get lost! I was invited not only to visit but also at times to stay at the houses of my Japanese friends. This made me understand Japanese culture little more. So I have a very good impression about Japan. Even when I am in India and other countries, if I find Japanese people, I talk to them in Japanese. I work for a university, which was set up by Nobel laureate Rabindra Nath Tagore, who had visited Japan exactly 100 years ago! He started Japanese Language Department in our University, bringing teachers from Japan. Due to the Japanese Language Department, I see many Japanese people and attend Japanese conferences in my University. I have many Japanese friends staying in Japan as well as the ones who visit India.

—I am also told that you have visited many places in Japan for field survey. Have you found any problems or anything impressive from a universal design perspective?


Padmini Tolat Balaram: Yes, I found many. For example, Japanese traffic lights produce sounds for visually impaired people. The sounds are different for the green light and the red light, which is very impressive as it helps blind as well as the normal people. The sound is heard even before one reaches the crossing. In the center of the footpaths, textured tiles are also placed to guide the visually impaired to walk in a straight line and inform them when the footpath is ending, by placing three tiles horizontally at that point. The textured tiles could also be difficult for the wheelchairs to role on, if the wheel chair is driven slightly on one side of the footpath. Hence to avoid the discomfort for the people using wheelchairs, textured tiles are placed right in the center of the footpath so that the wheels touch the flat tiles placed on the both the sides of the textured tiles on the footpath. This kind of thinking and execution of Universal Design is very impressive. However, the same yellow textured tiles are difficult for general public to drag the luggage with wheels, to reach the subway or bus stations, when they are travelling; as the textured tiles make it difficult for wheels to role smoothly.

—People may put their roller bags unintentionally, which becomes impediments for visually impaired people. Can you please tell us about these universal design aspects you have noticed in Japan and about the concept and progress of universal design in India? 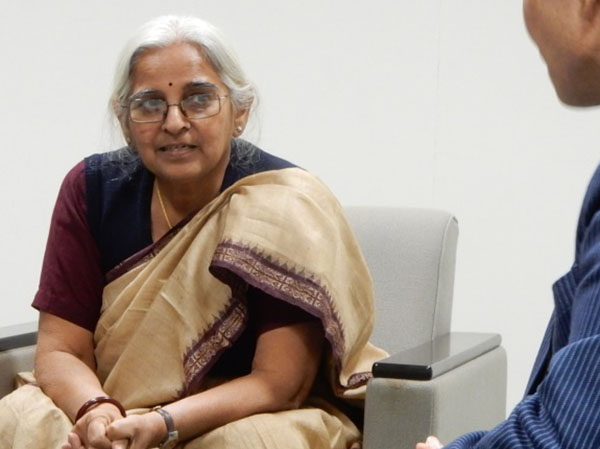 Padmini Tolat Balaram: In Japan, universal design is highly advanced. Japanese organize conferences and workshops and also teach students universal design. Balaramsan introduced Universal Design as a regular compulsory course for the first time in India at D. J. Academy of Design in 2005. That was the beginning of Universal Design education in India. In 2011, Balaramsan with a few thinking Indian Designers developed an important document, ‘Universal Design India Principles (UDIP)’, which are suitable to Indian conditions. As the Dean of D. J. Academy of Design, he also held the first Universal Design Conference in India in Collaboration with British Council in March 2015. The Declaration they made at the end of the conference was sent to The Government of India which helped in now starting ‘Sugamya Bharat Abhiyan’ (Accessible India Campaign), where government is going for making public buildings accessible for the differently abled, using Universal Design Principles, in selected 50 cities of India. For these efforts D.J. Academy of Design was awarded Grand Award by IAUD in 2015 in the category of UD Education.

Many companies in various fields join hands in doing business in Japan, but this kind of business practice was not carried out in India.

There are trains with a compartment allotted for people with disabilities, but these compartments are not actually used at all. The reason is that the space between the train and the platform is very wide and people may fall in, leave alone a wheel-chair user, especially the visually impaired, old or pregnant. The heights between the train floor and the platform are different. Therefore persons in wheelchairs find it impossible to get on and off the train. In Japan, train conductors help persons in wheelchairs to get on the train. This doesn’t happen in India. Furthermore, only the persons in wheelchairs without accompanying family members, are allowed to get on the specially allotted (not designed) compartment, which turns out to be not practical. The special compartment allotted for the disabled persons is inevitably occupied by the railway company workers. If anyone ask them why, they answer that since no disabled person is using it, they are using it. (laughs)

—Did you see the exhibition?


Padmini Tolat Balaram: We didn’t have enough time to see the whole exhibition as I had two lectures and Balaramsan had one lecture to deliver in the conference today, but yesterday I saw half of it. We would be seeing the rest tomorrow. However, we found many good products. I saw the Panasonic booth and the Asai’s House booth and the changing room for the wheel chaired, thoroughly, as well as many small products. Holding exhibitions is a good activity. Seeing actual products facilitates easy understanding of functions and mechanisms. Some site sessions were great. Sessions were very different depending on the promoter. 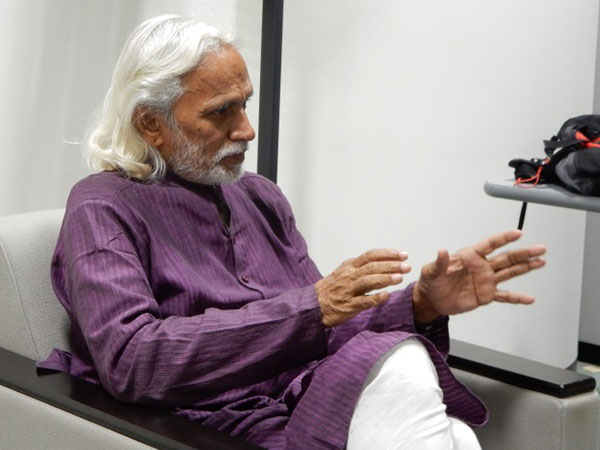 —We will work hard to improve site sessions in various aspects.


Singanapalli Balaram: At the Exhibition, I have personally admired the 100 percent Bamboo napkins, exhibited at the venue. They were small but of high-quality. Among other things, what I liked was an adjustable toilet, by Seksui Company, height of which is changeable to the height of the user. This may be lowered for a person in a wheelchair. Like this, many products with special functions were displayed, which is very impressive. I also found a table and chairs with adjustable height which suite both the physically challenged and non-challenged.

—Toward the 2020 Tokyo Olympics and Paralympics, can you give us any advice or suggestions in terms of universal design?


Singanapalli Balaram: I wish to see the Olympics where visually impaired persons and visually unimpaired persons, persons in wheelchairs and persons not in wheelchairs, can participate together rather than organizing the Paralympics and the Olympics separately. However, when it comes to what we can do toward the 2020 Olympics and Paralympics, it is ideal to unify the two conventionally-separated events into one. My idea is that such unification of the games brings real joy for the challenged and the non-challenged and foster real integration of society, which is universal design. The Non-handicapped people and the handicapped people playing together, creates a sense of unity among them. For example, with support from a normal person, a person without hands can eat meals and visually impaired persons can travel to any destination. Handicapped persons can accomplish what they cannot do otherwise all by themselves. What holds true for both meals and travel may also hold good for sports, This to my mind is very important. In India, some voluntary organizations tried this and it is working very well. It is mutually enjoyable by both challenged and non-challenged people. This, I believe, is the true universal design.

In fact, if all athletes (abled and differently abled) compete on the same level, and if the judgment criteria are same, things may not work out fair. Therefore, we will have to necessarily change evaluation and judgment criteria to make things fair.

The award winning Indian movie ‘Lagaan’ includes a scene of playing a cricket match between the Indian team and the British team. One of the members in the Indian team had a disability and he could not raise his arm well. The team skillfully turned this dis advantage into advantage by using this person with disability as a remarkable spinner, which the normal persons find difficult. This led the Indian team to a win against the strong opponent team. Like this example, many disabilities are not necessarily disadvantages but maybe potential advantages.

Another example is the telephone operator’s work. The Visually impaired people have greater concentration, so they may provide better services than visually unimpaired people do. This help them raise their awareness of themselves and their greater capabilities leading to greater confidence, as well as leads to the improvement of service quality. Specifically, for things related to hearing (sound sources), visually impaired people have an advantage. Therefore it is necessary to encourage people to think that what seems to be an impediment may make a positive contribution to work.

—Thank you for taking time out of your busy schedule for us today.