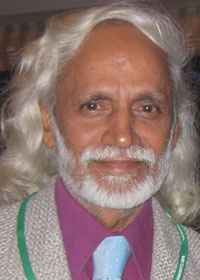 Also Balaram is author and Designer with 47 years of experience in Design Education. He Is one of the pioneer group Design teachers who started design education in India.

Recipient of 4 patents for his innovations.

Conferred the Helen Keller award for his work for people with disabilities.

Honored with the international Ron Mace ‘design for 21st century award’ for Universal Design, the only Indian to get this honour.

Organizer of worlds’ first UNIDO-ICSID meeting on “Design for Development” resulting in the seminal ‘Ahmedabad Declaration’ which paved way to India Design Council.

First to coin the word ‘majority world’ to replace the ‘developing world’.

Resource expert at the International workshop on “Design for the elderly” held in Philippines.

Keynote speaker at the apex International conferences on Universal Design held in Kyoto (2006) and in Hamamatsu (2010).