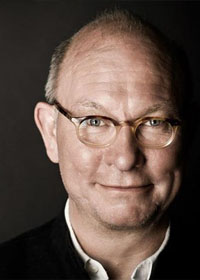 Architect and designer Bo Linnemann has been influencing international design ever since the beginning of the 1980s.

His company, Bo Linnemann and Kontrapunkt A/S, has 27 years’ experience in developing large-scale cross-media visual identities for major multinational clients. It was named Design Agency of the Year 2011 and 2016 by Creative Circle.

Linnemann was educated at the School of Architecture, Royal Academy of Fine Arts, Copenhagen, where he later served as a Professor and Head of the Design Institute.
Since 2006, he has been visiting professor at Musashino Art University, Tokyo, and he also lectures at universities in China, Israel, Japan, Korea, Qatar, South Africa, the UK, USA, etc.

He has been awarded the Danish Design Prize 17 times, and he has received numerous international design prizes.