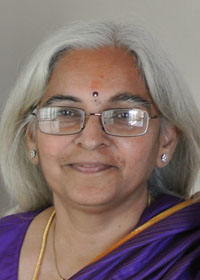 Dr. Padmini Tolat Balaram is presently working as Professor of Design at Visva-Bharati University in India. Prior to that she was Professor and Head Extension, D. J. Academy of Design, was visiting/Adjunct Professor at NID, CEPT University and NIFT. Apart from teaching 16 different design subjects, she has carried out extensive multi-disciplinary research in India, China, South Korea, and Japan. She has also researched in other Asian countries such as Thailand, Bhutan, and Uzbekistan, among others. She was awarded prestigious Research Fellowships from Japan Foundation twice; from Asia Scholarship Foundation; from Nehru Trust for Indian Collection at Victoria and Albert Museum, UK; Fulbright Fellowship to teach Natural Dyes and Surface Design at University of Nebraska Lincoln; and an OLF Travel Grant. She has documented several crafts of India and other Asian countries to revive them, has experimented with natural dyes and resist techniques, created new textile and craft design collections to suit the present local and international markets, and has held several exhibitions around the world of her eco-friendly textile arts and wall hangings.

Her first research in Japan was as a Japan Foundation Fellow, on ‘Indigo and Its use in Japan: A comparative study with India’, where she documented and experimented with Nihon Ai, Ryukyu Ai and Indo Ai, various Japanese techniques of designing with dyes including Shibori, Kasuri, Tsutsugaki, Bingata Katazome, Edo Komon, and Tsujigahana. She dyed around thousand samples using Japanese natural dyes and created several art works using indigo, which she exhibited in Indian Embassy in Tokyo. For field research, she travelled widely from Okinawa to Hokkaido. During her Japan Foundation Fellowship in 2006-07, she worked on Textile Route from India to Japan via China and Korea and Its Impact on Japanese Textile, which led to her subsequent PhD work in this area.

She has also designed costumes for two feature films, authored 2 books, 5 chapters in a books, several articles, conducted workshops and delivered Lectures at various University and Museums of Asia and USA.