There is an international market for universal design product.

— First of all, next year, it will have been 10 years since IAUD was established in 2003. What do you think of the progress of Japanese universal design in the last 10 years?


Valerie Fletcher: I think the progress is remarkable. I routinely credit Japan as being in front of other nations. One of the most stunning distinguishing features of Japan – two actually; one is the high-quality advancement of the business community and number two is a commitment to public organizations. I think Japan has been engaged in universal design largely because of the leadership of business and innovative elected leaders. The idea that 70% of the Japanese population are at least familiar with the term; it doesn't occur anywhere else in the world. According to our global consultations, many people have that goal but none have not been successful anywhere near that level.

— The second question, how do you feel about what is our Japanese role to progress universal design in Asian area?


Valerie Fletcher: A couple of things. One, I don’t see Japan as driven by legal mandates on universal design. Many other places look to legal obligations. In my mind the biggest risk is that universal design would be perceived to be just a synonym for barrier-free. We see barrier-free/accessible design as a floor, a baseline upon which we go beyond it to create solutions that anticipate the widest possible group of people and focus on enabling and supporting their experience, not just removing barriers. The danger is to go no further than ‘just tell me what I have to do.’ It’s a bad solution in my mind. It will destroy the commitment of the design community for one thing. One of the points is that there’s a great deal that we still don’t know. I think the frontier area is actually differences in how our brains work, whether you are a child or an adult or an old person with developmental delays, mental health issues, cognitive issues.

A point, in the United States integrated education has been the law for 30 years. Children with disabilities are in the classroom with everyone else and it has a profound impact on attitude - start with that. Today, 86% of US children with disabilities who are in our “special education” programs in integrated classrooms have brain-based conditions. Brain-based functional limitations are a very big issue at all stages of life.

— I think we Japanese and many people who live in Asia have changed our sense of security since Japanese met the tragic earthquake and tsunami last year. Now we have two points: first is saving our life from the future natural disaster; second, getting back our sense of safety about daily life after disaster. These two issues are very serious problems for us. Then, I have a third question. What do you think we have to do to realize sustainable society in terms of saving life and recovering our daily safety life after disaster?


Valerie Fletcher: First of all, my sincere regrets for that terrible experience. You may know that the United States had some major disasters 10 years ago, the 9/11 World Trade Center bombing and then Hurricane Katrina. It taught us a lot about how to respond. We’ve had a little more time to prepare but we do know what it feels like for a lot of people to have a sense that they are unsafe. As in Japan, disasters I the US were particularly harmful for older people, children and people with disabilities - very bad. It has become a priority for us to figure out how to do it better.

We’ve been doing a lot of work in this area for the last decade.
The paper, on which I was a reviewer, represents new US policy in the last few years. It refocuses the discussion on functional limitations rather than the usual categories of older people, people with disabilities, foreigners, people with short-term health crises and children. If we add up all those people, it’s 50% of the population, and so we are saying, no, it doesn't make sense for us to do disability, aging, foreigners; how do we think differently? The reality argues that everything we do in the context of emergencies has to anticipate a very wide range of functional differences. 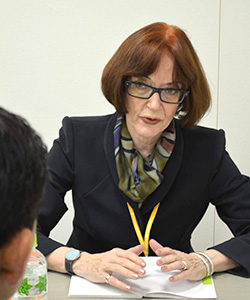 It may not be true in Japan, but in much of the world and certainly in the United States, many people with functional limitations, particularly people who acquire them later in life do not see themselves as ‘disabled.’ Functional limitation is a statement of fact rather than a category and we think there is merit in thinking in this way in the context of disasters.

It’s now a federal policy in the United States, so no more ‘special needs’ policy; now it’s ‘functional needs.’ It’s a big idea. It’s a universal design idea. Basically it supports the idea that universal design is the only framework that makes sense in preparing for disasters.

We are now trying to build recognition of risk in the community to prepare people for potential disaster, whether it’s a natural disaster or a chemical disaster or whatever. We're working a lot with people to try to get them to stop thinking about this category and that category, and recognize that it’s about everybody; and you need to think differently to ensure we plan appropriately to protect the most vulnerable people. And I’d point out that physical issues are not the only concern but also sensory limitations and brain-based conditions like developmental delays, brain injury, dementia, mental health issues. Multisensory information is a key.

— What do you think of the relation between disasters and cars?


Valerie Fletcher: I think automobiles and disasters are particularly troubling because people assume that they can get somewhere, and it isn't always true, and they aren’t necessarily getting information they need from inside a car. In the United States, what’s happened is that people have been trapped; thousands and thousands of people trying to get away before the disaster hits.

I think automobiles, for so many people, are almost more important than their home. They spend more time in them in the United States. It becomes a place that you seek safety.

— We have to try to get, or adapt the kind of policy or a point of view to the car interior. That’s very important.


Valerie Fletcher: I think it has a great deal of potential. I’ve had the opportunity to have a lot of discussions in the United States about some of the features that have become more common place in interiors targeted for older people in particular, to get information but particularly to be able to communicate that you have an emergency situation, and what comfort people take in knowing that the car will act, in some cases automatically.It’s so important to people, especially older people, even if they’ve never had a personal experience with emergency.

— Finally I would like to know your expectation or request to the activities of universal design in Japan.


Valerie Fletcher: I have one very big request. The Japanese must recognize that there is an international market for universal design. It needs to be marketed differently in different cultures but there are so few products that have been made available. I have been saying this for years.

For example, I want KAO and Panasonic to sell their universal design products or products for emergency circumstances in the States, and I want them to be available because we need them and no one has done anything like it. Though I have been saying many times, I worry that I have not been effective in convincing people about the potential of the global market.

The advantage of Japanese design is oozing elegance and harmony

It is my dream that to combine Scandinavian design and Japanese technology and to create excellent products.

towards2010: Reflections in a Time of Crisis and Opportunity 2/2

towards2010: Reflections in a Time of Crisis and Opportunity 1/2