I expect Japan to spread globally the thinking of freedom, equality and fraternity.

— First of all, next year, it will have 10 years since IAUD was established in 2003. What do you think of the progress of Japanese universal design in the last 10 years?


Francesc Aragall: I would say that’s amazing. I mean I knew about the Japanese approaches in the year 2000 in Congress in New York and since then I think that you are clearly the country that has evolved more not only the tangible routes but also the concept.

— The second question, how do you feel about what is our Japanese role to progress universal design in Asian area?


Francesc Aragall: Nowadays it’s very difficult to talk about borders and for sure, your commercial relations are closer to Asian countries but I think that your influence can be worldwide. What I perceive along the years is that Japan has an intense program of cooperation with the developing countries. I’ve seen that you have been using universal design strategy also in the assistance to developing countries and for sure that will influence also.

I think that Japan is very aware of the Asian population, but you are also a society that you are used to empathy. Therefore you might export the empathy attitude to Asian countries.

— You talked about exporting our empathy which is characteristic to Japan. Do you think Japan as a country is mature enough to export that kind of concept to other countries in Asia?


Francesc Aragall: Yes, I think so. I would say that in a world with an extreme capitalism approach, if there is something that we share between Europe and Japan it’s precisely this sense of culture and this sense of humanity, let’s say. For sure, if we are lucky as human beings, these beliefs will influence the rest of the world to be more aware of the need for respecting the planet and the need for respecting the people’s dignity. Therefore, Japan must play a big role in the Asian part of the world.

— I think we Japanese and many people who live in Asia have changed our sense of security since Japanese met the tragic earthquake and tsunami last year. Now we have two points: first is saving our life from the future natural disaster; second, getting back our safety daily life after disaster. These two issues are very serious problems for us. Then, I have a third question. What do you think of how do we have to do to realize sustainable society in terms of saving life and recovering our daily safety life after disaster?


Francesc Aragall: Well, the first thing just to make a wide comment. The first thing is that disasters like the Japan ones remember us that sometimes the human being is too arrogant We should always keep in mind that the natural forces can be very big, and humans are vulnerable.

The second thing is that I would say that Japan has also realized in this catastrophe situation that the more fragile part of the population are the ones that should be better protected.

The third thing that they have realized is that apart of that you got the ability to start, to recover very fast, you got also the ability to innovate after learning from this because I am starting to see very interesting products from different companies that have a use in normal life, but an additional or different use in case of emergency. I mean giving to the products a double utility that I think is also very interesting from the point of view of helping people to face catastrophic situations.

Then I would say this in my speech tomorrow that Japan has different aspects from other countries. There are the terms: Liberte, Egalite, and Fraternite, there seem to be such expressions in French.. They mean Freedom, Equality, and Fraternity in English. And you, in Japan, have personally realized that disasters equal us quite much because it put us all in a very bad situation. Now Equality has been experienced, because everyone had to live terrible situations in the same way.

And you have learned that it’s only through Fraternity that you can recover the Freedom. It is difficult to imagine another part of the world that after a situation like this, people are just behaving being friendly with the neighbors. No goods stolen. No violence in the street. No riots. I mean in this sense, Japan is an example for the world.

— Going forward we are wishing for is achieving much more sustainable society than it is right now in Japan. To that end which one of the aspects you just mentioned would help us most if we focus on that? 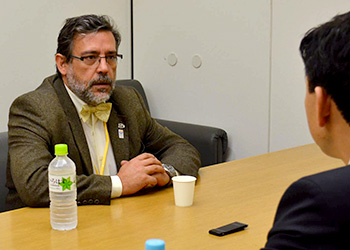 Francesc Aragall: I think that from the geographical point of view, Japan has a problem. You are an island without oil and you have faced now a nuclear disaster. We all wish future without nuclear or without not-very-safe nuclear plants, but how Japan can manage to be productive without energy? It is clear that on one hand, let’s say, the quantity of energy that you can today produce with solar plants, windmills etcetera is still limited. Therefore, you have two options. You bring the energy from abroad or you keep the nuclear plants. But in any case, Japan is nowadays exporting more ideas on software than hardware and to produce ideas on software is clearly spending less energy than to export goods and materials. Maybe a good strategy for Japan will be to design things in Japan to be produced in other parts of the world where the energy is more available. I think exporting ideas with spending less energy is one strategy.

— Nice idea. I guess it’s a point how we get the energy? It’s very difficult.


Francesc Aragall: That is in Europe except for Norway, we are also a continent without energy in general. Now, we are importing gas from Algeria, from Russia, oil from the Arab countries. In fact, what we need in Europe is to produce massively in China. But, I think the challenge is to produce less, to give to the goods more value. In that respect, I can just, as you are from Toyota, you would be amazed if one day you come to Barcelona. A big percentage of taxis in Barcelona are hybrid Toyotas because from the taxi drivers the idea is very clear: They save €160 to €180 per month by using your cars. Then, if you manage that your cars last more, in fact, you need to spend less energy in producing cars and less time. Maybe the future strategy is that you have a car that is replaced by parts instead of being totally renewed.

You can think from, in the trains industry. Normally in Europe, the rolling stock in average lasts something like 30 or, in Italy, 40 years, but what they do is when the wagons are 15 years old, they make a major renewal of all the wagons that makes the wagon last 15 or 20 years more. Then that would be a strategy because maybe the strategy is not to recycle, but to renew in this way.

— Finally I would like to know your expectation or request to the activities of universal design in Japan.


Francesc Aragall: We are having conversations with the association, IAUD. We are discussing with IAUD but also with the Helen Hamlyn Centre for Design from United Kigdom, the Norwegian Council of Design and the Art Center of Design in Pasadena, U.S.A to draft a protocol to unify the efforts of these communities, as a measure to put ideas into action globally. There are many declarations in favor of the human being or the environment that were signed one day but the world should be improved day by day. What we are trying together now is to develop a tool that can be a way of engaging more people in universal design, engaging more people in creating a society for all and providing them with tools that can facilitate these engagements in their daily activity.

Japan is the country which does people-friendly design.

towards2010: Mainstreaming Design for All